In our schemas the contentcreators created fieldnames with UpperCaseFirst (PascalCase).
CLI Sync out also gives the correct fieldnames in the json files. But when changing content and starting Sync in, the fields are unknown, see image.
Whenever I update the fieldnames in Squidex to camelCase fieldnames, the Sync in works fine.

When I change the fieldnames in squidex to camelCase and restart the Sync in it works. Even though the json still contains PascalCase fieldnames. Do the sync out and sync in both use the same JsonHelper?

I know camelCase is the way to go for JSON. Can you make it a case-insensitive Sync in/out functionality?
Or maybe force camelCase when saving/creating fields in schemas? So sync in/out won’t have to be updated.
If you need more information, let me know.Thnx! 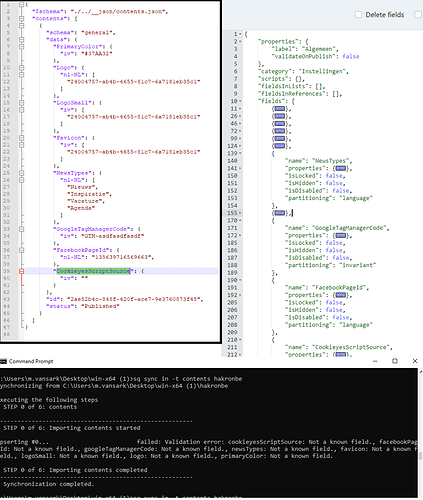 I have pushed a new version.