When copying some content from Word, and pasting it into the default rich text editor in Squidex, an image with the same content as the copied content spawns below the paste.

I write some text in MS Word, which I then select and copy. I go to Squidex, where I have a rich text editor. When I paste, the text appear, but below it a png also appears. Its motive is the content of the clipboard. When an image is pasted, it appears twice in the rich text editor.

Others:
The bug does not appear on Firefox desktop or Safari desktop. 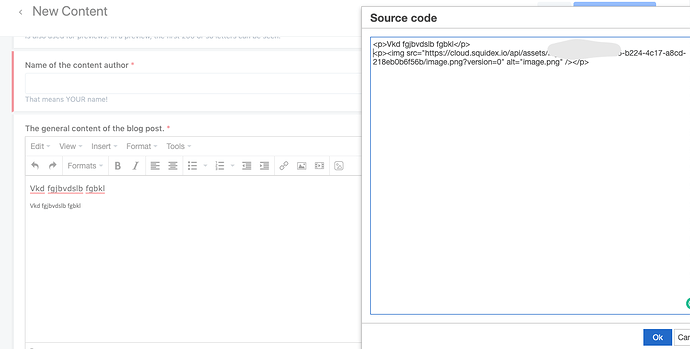 Have you tried to paste with CTRL + Shift + V? WYSIWYG editors usually preserve the formatting from the clipboard

I think it is a Word feature to also put an image of the selection to the clipboard. Unfortunately I do not have word.

@marcus_hum I tried to reproduce your problem by opening my local Word from Office 365. I inserted some text, marked it as bold, copied everything and pasted it into the RichText editor. Upon viewing the source code, everything is correct.

If you don’t want to use the shortcut I pasted above, click on Edit -> Paste as text

Thank you guys for taking the time to look at this!

I will convince my editor to use Safari instead of Chrome. Sometimes it’s easier to work around a problem rather than nailing it down. To be honest, I reproduced the problem in Chrome yesterday, but today I am unable to do so.

I have a similar issue when I copy an image from snipping tool and paste it in my editor.
Another image is also paste at the end of the section I’m editing. The second image can be deleted but looks like a bug.
I’m using chrome and the latest version of squidex.

Hello @Lionel_Champalaune and welcome here to the community.

I can have a look, but if it is a bug of the editor itself there is not that much I can about it.