More of question and/or possible loophole here, really. I was thinking about adding a base64 representation of a thumbnail for uploaded image assets. This works to the extent that I have a rule that triggers on Asset changes and pings an external API that then creates the thumbnail and persists it to the a meta data field, so far, so good.

The base64 string, even for a 50px thumbnail ends up at 2000+ characters, which makes the Asset editor complain as the max length for a metadata field is 1000. The API allows saving it, but the UI complains. Is there a reason for the 1000 character limit, or can it be removed? Is storing larger strings as metadata a bad idea?

which asset editor do you mean?

the one that opens up when clicking the pen icon on an asset, please find screenshot attached. 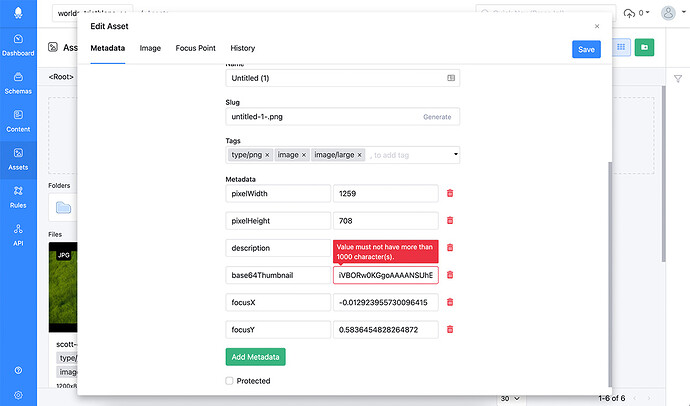 Yes, we can remove that.

Thanks for answering! I assume this isn’t a config setting somewhere (I looked but could’t find any obvious)? If not, should I post a feature request, or how does this work?

I have changed it, but not tested it yet.